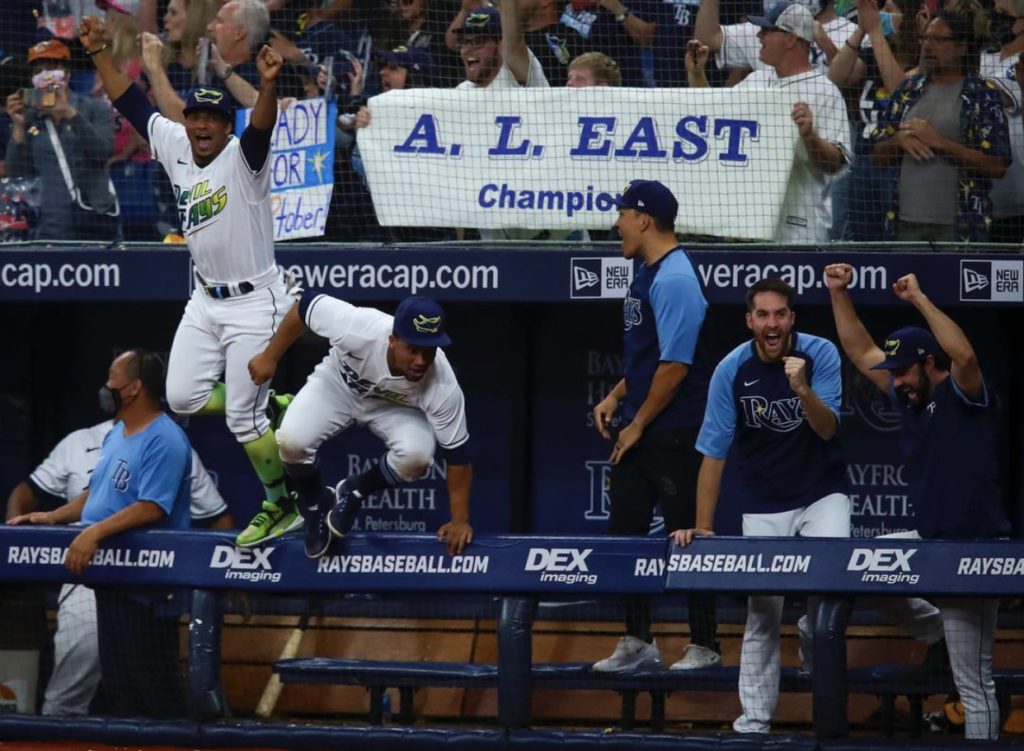 The American League East championship isn’t going anywhere, as following the Boston Red Sox loss at home to the New York Yankees, the Tampa Bay Rays used a two-run homer by Mike Zunino to break a 1-1 tie and go on to defeat the Miami Marlins 7-3 and earn their second consecutive division title Saturday night at Tropicana Field.

It was Miami that jumped out to an early lead, as Miguel Rojas led off the top of the third inning against Shane McClanahan with a solo homer to left to give the Marlins a 1-0 lead.

Despite allowing six hits and a walk in five innings of work, that would be the only run allowed by the left-hander, as he went on to earn his tenth win of the season, tying Josh Fleming for the team lead.

Tampa Bay tied the game in the bottom of the fourth when Austin Meadows tripled off Marlins starter Sandy Alcantara, and scored on a two-base hit from Joey Wendle.

The Rays took the lead for good in the fifth, as Brett Phillips reached to start the inning on a Jazz Chisholm Jr. error, and Zunino followed with a blast to right-center, his 32nd of the season.

Miami pulled again within a run in the top of the sixth, loading the bases against reliever Collin McHugh but only scoring on a fielder’s choice groundout by Eddy Alvarez, and the Rays immediately countered in the bottom of the inning, as Wendle reached on an infield single and took second on an Alvarez error, then scored on a base hit by Yandy Diaz.

A RBI single by Bryan De La Cruz in the seventh again inched the Marlins closer to tying the game, but Brandon Lowe‘s RBI double in the bottom of the seventh scored Zunino from first base to make it 5-3, and Tampa Bay added two more in the eighth on a sacrifice fly by Phillips and another run-scoring double by Lowe, his third two-base hit and fourth hit overall in the game, setting the score at 7-3.

Pete Fairbanks loaded the bases in the top of the ninth, but got Lewis Brinson to pop out to Ji-Man Choi in foul territory to end the game, and clinch the division title.

The Rays can finish the weekend with a sweep of the Marlins by taking Sunday afternoon’s finale, as Shane Baz (1-0, 3.60 ERA) will make his second career start, taking on Jesus Luzardo (5-8, 7.01 ERA).  First pitch is scheduled for 1:10.