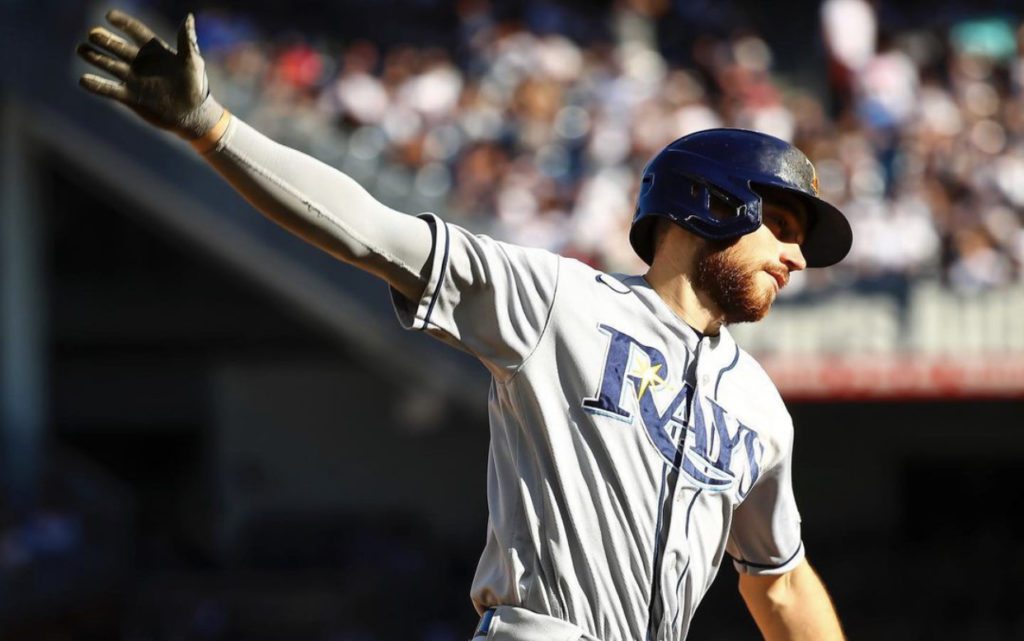 Brandown Lowe became the sixth player in Rays history to hit three homers in a game and drove in seven, helping Tampa Bay earn its 100th win of the 2021 regular season with a 12-2 victory over the New York Yankees Saturday in the Bronx.

Lowe started the scoring in the top of the first against Yankees starter Jordan Montgomery, following a leadoff walk to Randy Arozarena and a base hit by Wander Franco with a two-out line drive into the first row of seats in right for his 37th home run of the year.

The Yankees got one run back in the bottom of the first, as Anthony Rizzo hit his 22nd homer of the year, a solo shot off Shane Baz.

The game remained 3-1 until the third, when Franco led off with another base hit off Montgomery, and Yandy Diaz drew a one-out walk in front of Lowe, who got a similar pitch from Montgomery and delivered another line drive three-run homer to right and a 6-1 advantage.

Mike Zunino followed up with a blast to left, his 33rd of the season to make it 7-1.

Baz would leave two out into the third, having allowed just the Rizzo homer and a pair of walk, striking out four.

The Yankees got their second run in the fourth against J.P. Feyereisen, with Joey Gallo reaching on an infield hit and scoring on a triple by Brett Gardner.

But Feyerisen got out of the inning with no other damage caused, and Luis Patino would earn the win with two innings of one-hit relief.

The Rays extended their lead to 8-2 with a two-out rally in the sixth, with Arozarena singling, stealing second and third, and scoring on a single by Franco.

Lowe would make it 9-2 in the seventh with his third homer of the afternoon, this one off Michael King, giving him 39 on the season along with 99 RBI.

Zunino and Manuel Margot followed with base hits against King, and Austin Meadows pushed the lead to 12-2 with a three-run blast, his 27th of the season.