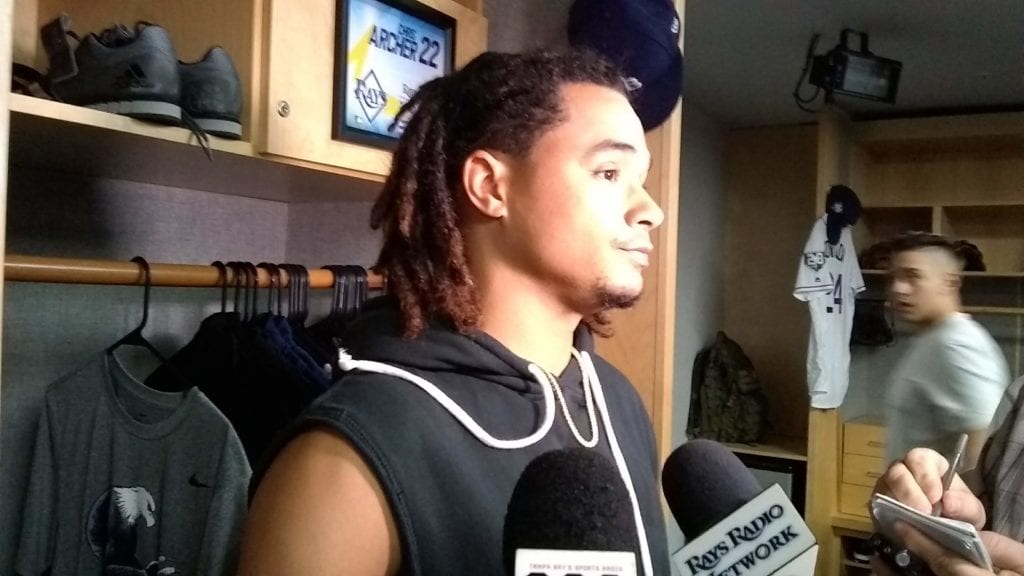 Chris Archer speaks to the media during his first stint with the Tampa Bay Rays in 2018. He re-signed with the team February 2. (Photo: Steve Carney)

Most baseball experts feel that the trade that sent pitcher Chris Archer from the Tampa Bay Rays to the Pittsburgh Pirates one of the most one-sided deals in the sport’s recent history, and now that trade may be cemented as one of the biggest fleeces of one team by another ever, as the team that dealt the pitcher away has brought him back.

Ken Rosenthal of The Athletic reported Monday evening that the Rays and Archer had agreed to a one-year deal worth a reported $6.5 million.

Archer missed all of the 2020 season for the Pirates after undergoing thoracic outlet surgery on June 2, and was just 6-12 since being acquired by Pittsburgh at the trade deadline in 2018 for pitcher Tyler Glasnow, outfielder Austin Meadows, and a player to be named later (who turned out to be minor-league pitcher Shane Baz).

The 32-year-old right-hander initially came to Tampa Bay prior to the 2011 season along with outfielders Brandon Guyer and Sam Fuld, catcher Robinson Chirinos and minor-league shortstop Hak-Ju Lee in exchange for pitcher Matt Garza and outfielder Fernando Perez. He made his major league debut with the Rays in 2012, and finished third in Rookie of the Year balloting in 2013 behind then-teammate Wil Myers and Red Sox/Tigers shortstop Jose Iglesias. He was selected as an American League All-Star in 2015 and 2017, but has not had a winning season since 2014, when he went 10-9 with a 3.33 earned run average in 32 starts.

Archer joins Michael Wacha as pitchers joining the Rays rotation this offseason, taking the places of Charlie Morton, who signed with Atlanta after Tampa Bay declined the $15 million option they held for 2021, and Blake Snell, who was sent to the San Diego Padres this offseason.