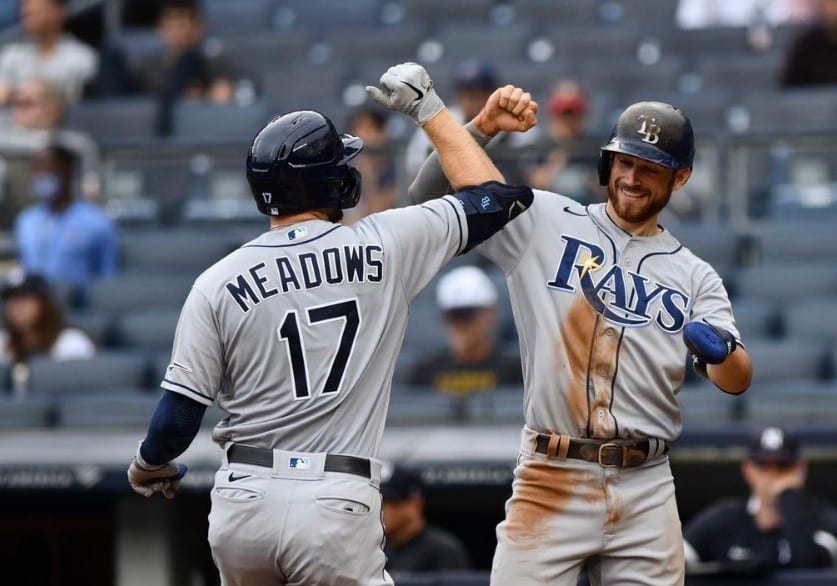 Ryan Yarbrough pitched the first complete game for the Tampa Bay Rays in more than five years, and Austin Meadows homered and drove in five as the Rays salvaged a split of their four-game series with the New York Yankees with a 9-2 win in Thursday afternoon’s finale.

Yarbrough fell behind 1-0 in the third, as Brett Gardner‘s solo homer into the seats in right gave the Yankees the lead, but Tampa Bay rallied right back in the next half inning and gave him the lead, as Brandon Lowe drew a leadoff walk from Gerit Cole, and after Yandy Diaz struck out, Meadows got pitch on the inside half of the plate and sent it into the right-center field bullpen for his team-leading 14th home run of the season.

New York tried to come back in the home half of the inning, getting runner to second and third with nobody out, but Yarbrough got Rougned Odor to fly to shallow right, and struck out Miguel Andujar and Clunt Frazier to wiggle off the hook.

The Rays added on in the top of the fifth as Mike Zunino drew a walk and Kevin Kiermaier moved him up with an infield single.  Randy Arozarena struck out, but Lowe followed with an RBI single to right and Diaz brought in Kiermaier and Lowe with a single of his own to extend the advantage to 5-1.

Cole (6-3) would be finished after five innings, but that didn’t stop the Rays from getting after the bullpen.  They would score four more times in the seventh off Nick Nelson after loading the bases in front of Meadows, who cleared the sacks with a double and scored himself on a base hit by Joey Wendle.

Miguel Andujar’s solo homer in the seventh would be New York’s final hit, as Yarbrough retired the final eight batters of the game to finish off the contest with the franchise’s first complete game since May 14, 2016, when Matt Andriese went the distance against the Oakland Athetics.