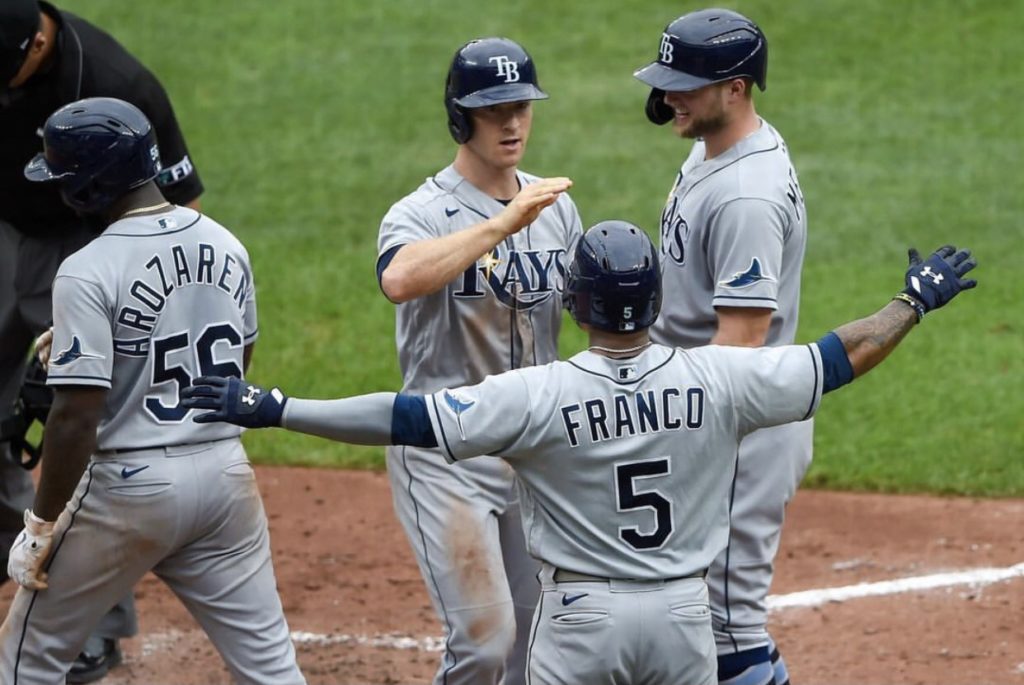 Joey Wendle hit a pair of home runs, including a grand slam, and drove in six as the Tampa Bay Rays equaled the Major League record for wins in a season against a single opponent with their 18th win in 19 games against the Baltimore Orioles with a 12-8 victory Sunday afternoon at Camden Yards.

Unlike Saturday’s come from behind victory, Tampa Bay wasted no time getting in front on Sunday as Brandon Lowe started the first inning against Spenser Watkins by doubling into the right field corner and scoring on a base hit by Randy Arozarena.  Wander Franco popped out for the first out of the game, and after Arozarena stole second base on Austin Meadows‘ strikeout, Wendle brought him in with a base hit and a 2-0 lead.

Chris Archer gave back one of the runs in the bottom of the first with an RBI single by Austin Hays, scoring Ryan Mountcastle, but Tampa Bay was able to re-establish the two run lead when Jordan Luplow‘s blast off Watkins hit off the top o the left field foul pole for his eighth home run of the year.

Mountcastle cut the lead back to a single run in the third against Archer with a solo home run, but the right-hander was able to finish his four-inning outing with the lead.

Meanwhile, Tanpa Bay was able to extend their lead in the sixth, as Franco singled, extending his on-base streak to 29 straight games, and Meadows followed with a two-run homer to right, his 22nd of the year, and Wendle followed on the next pitch with his eighth home run of the season, ending the Baltimore starter’s afternoon.

Jorge Mateo‘s two-run homer off Josh Fleming cut the lead back to 6-4 in the sixth, but Paul Fry‘s abysmal outings against Tampa Bay constinued Sunday as he allowed a one-out single to Arozarena followed by walks to Franco and Meadows before hanging a slider to Wendle, who promptly deposited it into the seats in right-center to make it a 10-4 ballgame.

Fleming allowed two more runs in the bottom of the seventh on an RBI single by Mancini and a RBI groundout by Stewart, but Franco git the ead back to six runs in the eighth with an RBI single and Kevin Kiermaier also scoring when Mullins lollipopped a throw back into the infield.

Mullins’ two-run homer against Shawn Armstrong set the score at 12-8.

The win ensures that the Rays will finish the weekend with no less than a five-game lead over the New York Yankees in the American League, and has guaranteed a winning record for the fourth consecutive season.