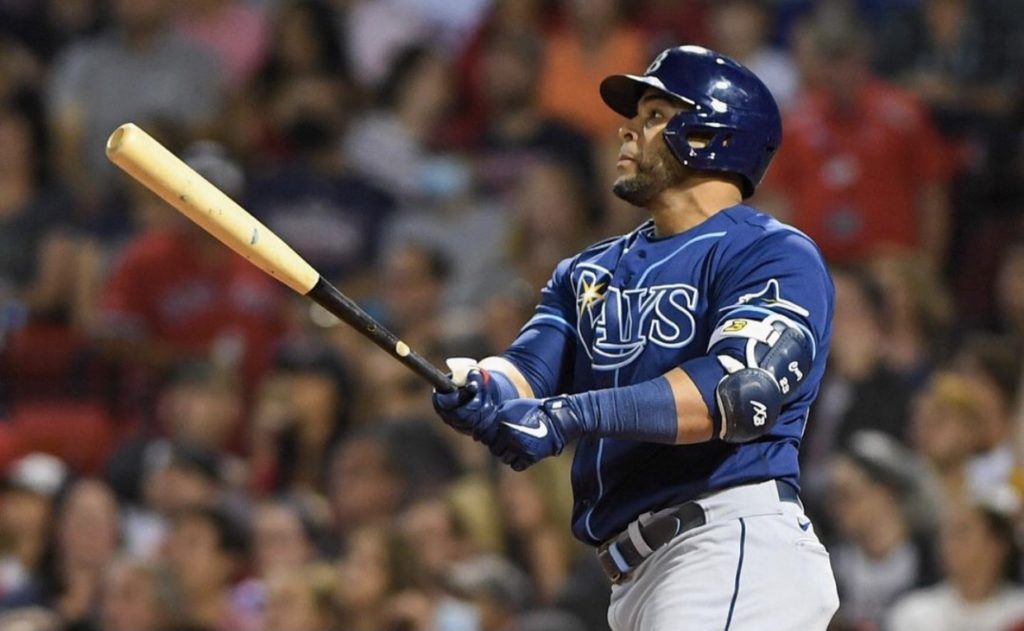 Nelson Cruz and Mike Zunino each homered twice and drove in four runs, helping Drew Rasmussen earn his first big-league win as a starter and ensuring another series win at Fenway Park thanks to a 12-7 win over the Boston Red Sox Tuesday.

Unlike Monday’s win, where Boston jumped out to a hig lead early, it was the Rays’ bats who pulled away at the beginning of the game.  Jordan Luplow and Manuel Margot gave Tampa Bay the lead with back-to-back doubles off the wall in left to make it 1-0.  Joey Wendle followed with a base hit, moving Margot to third, and both runners scored on a Zunino fly ball that got misplayed by Hunter Renfroe into a triple and a 3-0 lead.

Boston got one run back in the bottom of the second on an RBI groundout by Christian Vazquez, but Cruz got that run and another back in the third, following a double by Randy Arozarena with a blast into the home bullpen in right-center for his 29th home run of the season.

Zunino made it 6-1 an inning later with a massive home run to left, his 28th homer of the year, and Rodriguez would be lifted one better later.

Cruz pushed the lead to 7-1 with his second home run of the night in the fifth off Michael Feliz, his 30th of the season, and Zunino’s solo shot off Feliz in the sixth made it an 8-1 game.

Cruz became the oldest player in Major League history to hit 30 homers in a season.

The lead grew larger in the seventh, with Arozarena doubling to start the inning against Brad Peacock, and after a walk to Wander Franco, extending his on-base streak to 37 games, Cruz doubled to score Arozarena, and after Diaz lined out, Luplow launched a three-run homer over the wall in left to make the game 12-1.

Rasmussen (2-1) earned the win with his five-inning outing, and Louis Head worked two scoreless innings after being called up from Triple-A Durham.

Boston scored four times off David Hess in the eighth, and twice more in the ninth to get back to within five runs, and while manager Kevin Cash had to get closer Andrew Kittredge up and throwing in the bullpen, Hess was able to finish off the win.

The victory, coupled with New York’s loss to Toronto, means the Rays’ lead in the American League East is now 9 1/2 games, with Boston now 10 games behind.

The Boston Red Sox can thank one player for preventing the Tampa Bay Rays from a series sweep at Fenway Park, as Hunter Renfroe‘s...