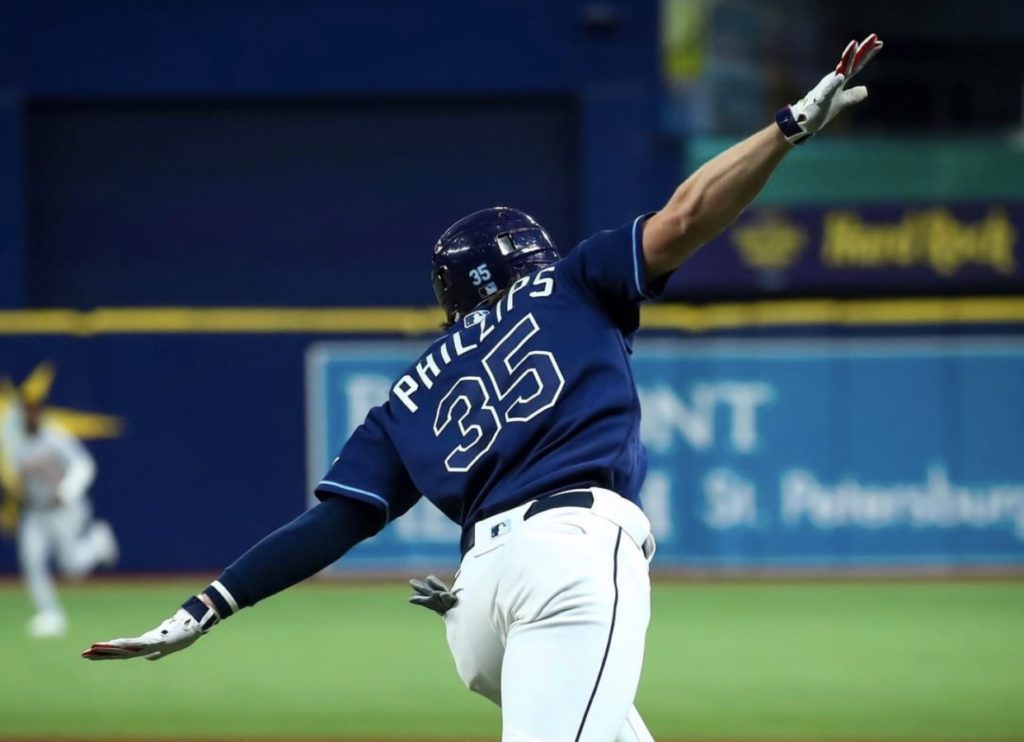 After stranding nine runners through the first eight innings of play, Tampa Bay started again in the bottom of the ninth when Manuel Margot‘s line drive ricocheted of Tigers closer Gergory Soto’s pitching hand for a base hit.  Francisco Mejia drew a walk, and Brandon Lowe singled to load the bases and force AJ Hinch to pull his closer in favor of Michael Fulmer.  Kevin cash went to the bench and brought in Yandy Diaz to pinch-hit for Ji-Man Choi, and he took Fulmer’s first pitch a drove it to center for a two-run single, cutting the deficit to 4-3.  Lowe then took third on a wild pitch and tied the game on a Randy Arozarena sacrifice fly.

Andrew Kittredge worked a 1-2-3 top of the tenth, getting some help from Lowe, who made a diving stop on a Akil Baddoo grounder with one out to keep Niko Goodrum from scoring and breaking the tie.  In the bottom of the inning, Bryan Garcia walked Taylor Walls on four pitches, and fell behind 3-1 to Phillips before giving him a fastball down and in that the center fielder pulled over the seats in right for his 13th home run of the year.

Detroit jumped out to a 1-0 lead on Luis Patino‘s third pitch of the game, which was hit out by Baddoo for his 13th home run of the season.

Tampa Bay tied the game in the bottom of the first thanks to a Austin Meadows sacrifice fly, but the Tigers added two more runs off Patino in the second on an RBI double by Goodrum, and following a wild pitch, a groundout by Victor Reyes, then made it 4-1 in the third on a sacrifice fly by Harold Castro where Arozarena nearly threw Grossman out at the plate to end the inning.

But after the third, the Tigers bats fell laregly silent.  They had just one hit after the third inning, an ninth-inning single by Eric Haase off David Robertson, as patino worked through the sixth, followed by Louis Head,  Nick Anderson and Robertson.

The win, coupled with Toronto’s loss to Minnesota drops the Rays’ magic number to win the American League East to six.