Coming off an off day following a 4-3 road trip to New York and Arlington, the Tampa Bay Rays will begin a five-game homestand tonight with the first of two games against the Washington Nationals.  Tyler Glasnow (4-2, 2.69 ERA) will get the start, taking on Jon lester (0-2, 4.37 ERA).  First pitch is scheduled for 7:10.

Choi Feeling Better, Could Be Activated Before Weekend’s End

Rays manager Kevin Cash said that first baseman Ji-Man Choi, who has been on the injured list with a strained left groin, is feelimg much improved.  Choi ran and took ground balls om the field today and is slated to do so again on Wednesday.  The team will make a determination later this week whether the 30-year-old will go on rehab assignment to Port Charlotte to get some at-bats.

Choi felt good enough after his workout on the field to have a little fun with the media interviewing reliever Ryan Thompson. 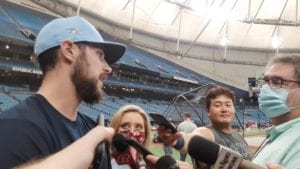 Choi is eligible to be activated from the injured list Sunday.