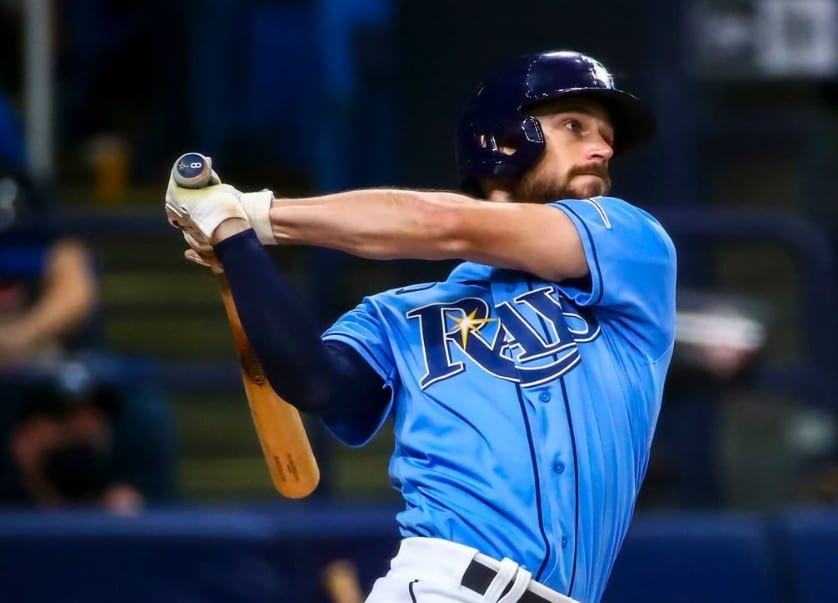 Tampa Bay used a two-out rally in the first to take the lead away from the Red Sox, as Wander Franco drew a walk in front of Meadows, and the designated hitter crushed a Garrett Richards pitch into the seats in right for his 16th home run of the year, turning a 1-0 deficit into a 2-1 lead that wouldn’t be relinquished.

The Rays would again jump on Richards in the second, with Brett Phillips drawing a one-out walk, stealing second, and scoring on Zunino 15th home run of the year.

Lowe followed up with a double, moving to third on a groundout by Ji-man Choi, and scoring when Enrique Hernandez couldn’t handle Franco’s ground ball cleanly.

Rays starter Rich Hill (6-2) slogged through five innings, allowing just a single run on three hits, but also walked five and needed 97 pitches to get through his start.

Tampa Bay added on to their lead in the seventh, when Matt Andriese hit Joey Wendle with a pitch, then gave up a base hit to Manuel Margot, and after strikeouts by Brett Phillips and Mike Zunino, Lowe crushed a pitch to center field for his 14th homer of the year and a 8-1 lead.

Boston got single runs in the first off Hill on a base hit by Xander Bogaerts, and in the eighth on an RBI single by Christian Vazquez.

Diego Castillo worked a perfect ninth inning to close out the game.

The win not only ends the Rays losing streak, but it pulls the team back to within one half-game of Boston for the lead in the American League East.

Tampa Bay can regain the division lead with a win Thursday evening in the finale of the series.  Right-hander Michael Wacha (1-2, 5.19 ERA) will get the start for Tampa Bay, taking on Nick Pivetta (6-3, 4.36 ERA).  First pitch is scheduled for 7:10.