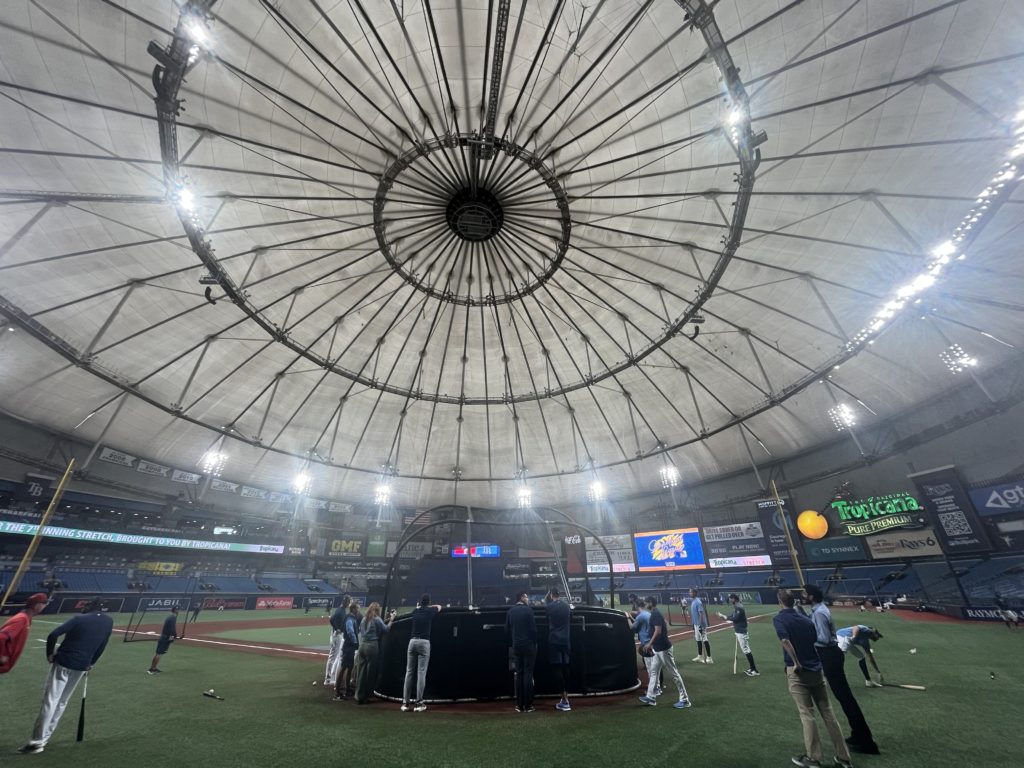 Now that the Tampa Bay Rays have made their first round of moves to close out their injured list and get back to 40 men on the major league roster, it’s now time to look at the next signpost in the off-season: the November 15 deadline to add prospects to the 40-man roster in order to protect them from being exposed to the Rule 5 Draft coming up in December at the Winter Meetings.

The Rays have a number of players that they will have to make the determination as to whether to add them to the big-league roster and removing a player that is currently on the team or risk losing them to one of the 29 other teams for $50,000.

Let’s start by looking at some of the prospects that could be protected from the Rule 5 Draft.

Mead, who just turned 22 in October, looks like he could end up being the power-hitting third baseman Tampa Bay has lacked since the trade of Evan Longoria after the 2017 season.  I don’t forsee him starting the year at the big-league level, especially because he has yet to play in more than 104 games in a season, but the Australian-born slugger should be knocking on the door before too long, especially if he has a monster spring in Port Charlotte.

Likelihood of addition: He’s one of two players that seem to be assured of being safe from the Rule 5 Draft.

Player he could replace: Outfielders Luke Raley and Bligh Madris are both candidates who could be designated for assignment and placed through waivers in order to clear a spot for Mead

Bradley, listed as the top prospect in the organization by MLB.com and 20th overall, showed that his dominant 2021 season (12-3, 1.83 ERA between Low-A Charleston and High-A Bowling Green) was no fluke and that his fastball, while only topping out in the mid-90s, is good enough to get the best prospects out, especially when paired with his filthy off-speed.

Likelihood of addition: Bradley is the other player that is virtually assured a spot on the 40-man roster.  The pitcher, who won’t turn 22 until late in Spring Training, will likely begin the year with Durham, but could be an early addition to the rotation if there is injury or a struggle in performance.

Player he could replace: Left-hander Ryan Yarbrough, after being a part of the Rays rotation at times over the last five years, could find himself without a true role going into 2023, his third of four arbitration years.

Hunt, one of four pieces Tampa Bay acquired by trading Blake Snell to San Diego, seemed to get his hitting in order last year after struggling at the plate in High-A the year prior.  Hunt also threw out 27 of 97 runners that tried to steal against him last year, which would put him above league average at the major league level.

Likelihood of addition: If the front office feels that he has an opportunity to make the team out of Spring Training, he could be added.  Hunt just turned 24 years old, and the club could risk exposing him knowing that a team that takes him would have to keep him on their 26-man roster all year or have to offer him back to Tampa Bay.  My guess is that because he hasn’t reached the Triple-A level that they will not add him.

Player he could replace: If Hunt does get added to the 40-man roster, it’s likely because the team has already dealt one of the three catchers that are on there now.

Edwards, who will likely forever be known as the minor-league player dubbed a “slapd%$k prospect” by Snell on Twitch when he was part of the Tommy Pham deal, had a down year in 2022.  It was the first season as a professional that he hit under .300 for a season.  But he has always been known as a player that knows how to make contact, and can certainly impact a game when he’s on base with his threat to run.

Likelihood of addition: Edwards is a little older than some of the other players on this list, having tuned 23 during the 2022 season, and with the glut of players that the organization already has that also do much of what Edwards does, I believe it’s more likely that Edwards is left exposed.

Player he could replace: Taylor Walls has shown he can hit throughout the minors, but has struggled to replicate that success at the big league level.  If they feel that it’s time to move on, the Rays could have Edwards, who has been the same type of player.

Stop me if you’ve heard this before…the Rays have a guy coming up through the system that plays all around the infield, has quick wheels, and can seemingly put bat to ball at will.  That’s Basabe in a nutshell.  Acquired from the Texas Rangers for Nathaniel Lowe, Basabe helped lead the Biscuits to a second-half title in the Southern League’s South Division.

Likelihood of addition: Basabe is a couple of years younger than Edwards, and I think is the more likely of the two to be taken the draft if left exposed.  For those reasons, I think Basabe has a better chance of being added, though it’s not a foregone conclusion.

Player he could replace: Vidal Brujan has shown the promise of a top of the lineup type of hitter, though his results have not met the expectations.

Hernandez, also a part of the Nathaniel Lowe trade, had a record-breaking season with the Hot Rods, setting franchise records in both home runs (24) and RBI (89), and was named the organization’s MVP at that level.  The soon-to-be 23-year-old can play both corner outfield positions as well as first base if need be.

Likelihood of addition: Hernandez is on track to be a player like Adolis Garcia of the Texas Rangers, and had a fantastic 2022 to show he can hit for a full season when healthy.  He’s a guy you’d want to protect, as it would be awful to see him producing like he did last year for another franchise.

Player he could replace: Miles Mastrobuoni is a player the team could pass through waivers to make room for Hernandez, and if they lose him, would not be as big of a loss despite him player two levels higher.