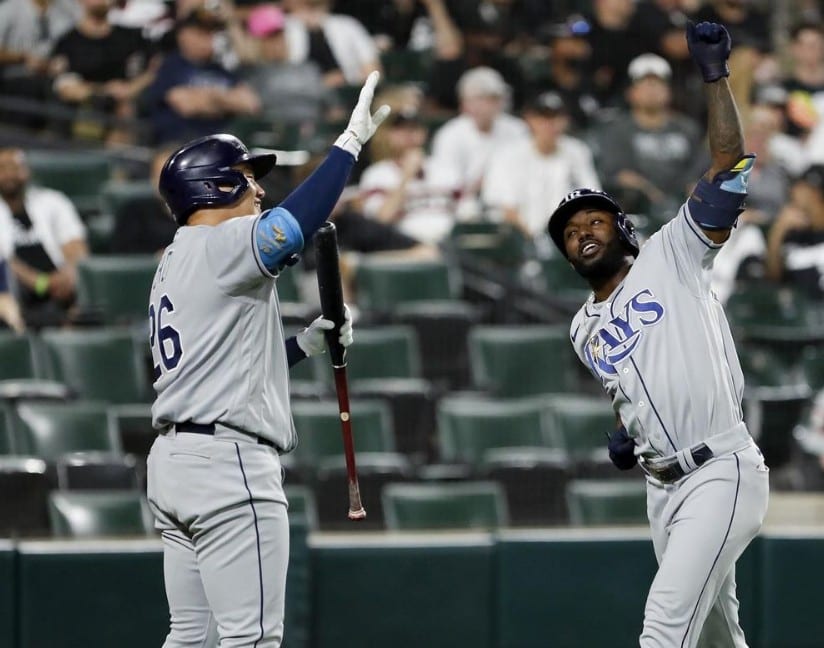 The Tampa Bay Rays got home runs from Austin Meadows, Brandon Lowe, and Randy Arozarena, but needed the bullpen to throw five scoreless innings after Tyler Glasnow left with an elbow injury to defeat the Chicago White Sox 5-2 Monday at Guaranteed Rate Field.

Tampa Bay wasted little time getting out to a lead on White Sox starter Lance Lynn, as Arozarena doubled off the right-hander with one out in the top of the first, and two batters later, Meadows got a fastball on the inside half of the plate and blasted it into the seats in right for his 15th home run of the year.

Lowe extended the Rays lead to 3-0 in the third by taking a cutter and wrapping it around the foul pole in right for his 12th home run of the year.

Glasnow rolled through the first two innings, but saw Leury Garcia double with ne out in the third to start Chicago’s lone rally of the night.  Danny Mendick moved Garcia to third and he would score on a wild pitch.  Tim Anderson followed with a double and cut the Tampa Bay lead back to a single run bu scoring on a base hit by Brian Goodwin.  Yermin Mercedes reached on a fielding error by Joey Wendle, but Glasnow struck out Jose Abreu to escape with the lead still intact.

The Rays starter would get through the fourth, but left after finishing the inning with what the team is calling inflammation in his right elbow.  Glasnow is slated to undergo an MRI Tuesday to determine the extent of his injury.  Ryan Thompson would put up a zero in the fifth, and J.P. Feyereisen (3-2) worked two perfect innings to earn the win.

Arozarena gave Tampa Bay an insurance run in the eighth, blasting an opposite field home run into the bullpen off reliever Garrett Crochet.

Jose Ruiz‘s fielding error in the ninth on a Brett Phillips ground ball allowed Taylor Walls, who doubled to start the inning, to score and make it 5-2.

Diego Castillo worked a scoreless eighth and Pete Fairbanks worked a 1-2-3 ninth inning to earn his third save.

The victory allows Tampa Bay to maintain their three-game lead in the American League East over the Boston Red Sox.