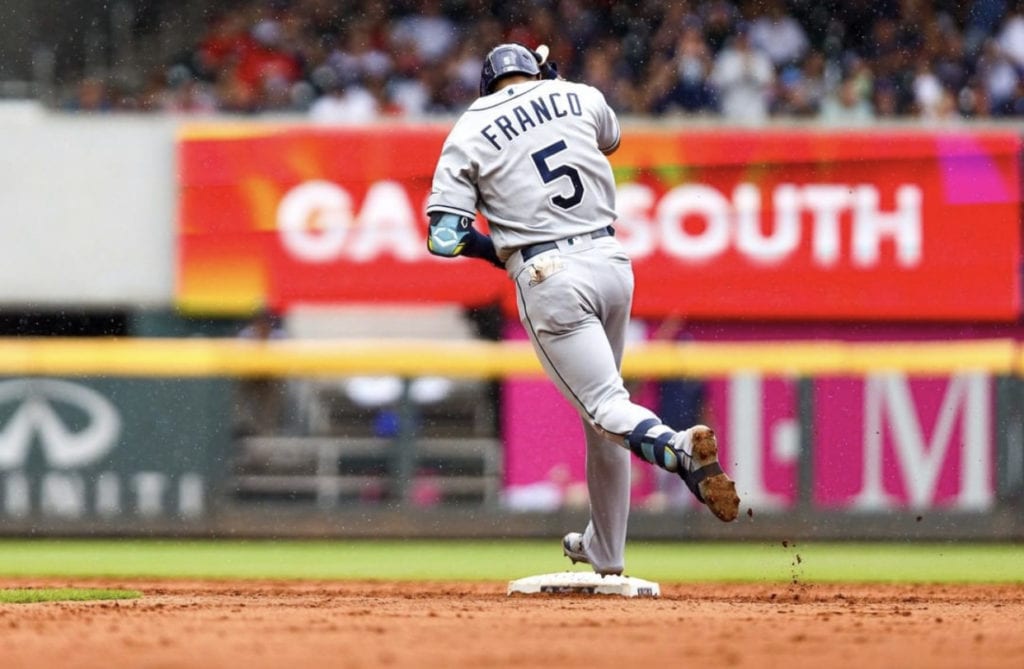 The Tampa Bay Rays rallied from a three-run deficit after four innings, using home runs by Wander Franco and Yandy Diaz to help go on to defeat the Atlanta Braves 7-5 Sunday at Truist Park.

Atlanta jumped out in the first inning against Rays starter Rich Hill, as Joc Pederson drew a leadoff walk, and after a popout by Dansby Swanson and a fielder’s choice by Freddie Freeman, Ozzie Albies‘ double brought in Freeman to give the Braves a 1-0 lead.

The game would remain at that score until the fourth, when Guillermo Heredia‘s double brought in Orlando Arcia, and two batters later, a groundout by Pederson scored Stephen Vogt made it 3-0.

Braves starter Drew Smyly would keep the Rays without a hit thrugh the first four innings, with only a two-out walk to Mike Zunino in the second keeping the left-hander from being perfect.  But Brandon Lowe‘s check-swing single leading off the fifth would get Tampa By in the hit column.  It would be followed by a double from Zunino, and after Joey Wendle flew out for the first out of the inning, a wild pitch by Smyly would bring Lowe in with the first run, and a sacrifice fly by pinch-hitter Austin Meadows cut the deficit back to just one run.

Franco tied the game an inning later with a solo shot off Smyly, his third of the season.

Atlanta broke the tie in the bottom of the sixth thanks to an RBI double by Pederson, but the Rays countered with four runs in the seventh to take the lead for good.  Kevin Kiermaier‘s RBI double tied the game back up, and Meadows lifted another sacrifice fly to give Tampa Bay a 5-4 lead, and Yandy Diaz blasted a two-run homer to right-center for a 7-4 advantage.

Collin McHugh allowed an unearned run in the bottom of the seventh, but worked a scoreless eighth, and Pete Fairbanks put up a zero in the ninth for his fifth save of the year.

The win, coupled with Boston’s loss to the New York Yankees, moves the Rays back to within one half-game of the Red Sox for the lead in the American League East.