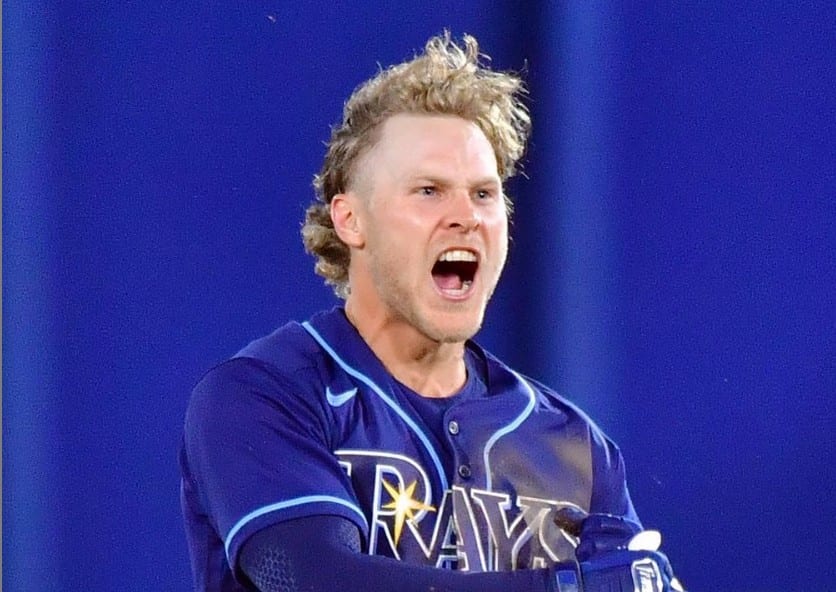 The Rays trailed 1-0 after seven innings, but finally g0t their offense moving in the eighth against John King.  Brandon Lowe reached on a throwing error by Isiah Kiner-Falefa, with Randy Arozarena moving him up on an infield simgle, and pinch-hitter Mike Brosseau drawing a walk to load the bases.  Austin Meadows popped out for the first out of the inning, and Rangers manager Chris Woodyard went back to the bullpen for Josh Sborz.  Sborz walked Diaz to force in a run and tie the game, and Taylor Walls followed with a two-run double that gave Tampa Bay the lead for good.

Tampa Bay added four more runs with two out in the ninth, as Meadows drove in Kevin Kiermaier and Brosseau with a base hit, and Diaz followed with a blast into the visiting bullpen for his first homer since August of 2020.

Texas’ lone run came in the bottom of the first inning, when Brock Holt doubled off Rays starter Michael Wacha, moved to third on a base hit by Kiner-Falefa, and scored on a double play grounder hit by Nate Lowe.

Wacha would work into the third inning, with Ryan Sherriff following by getting through the fourth.  Andrew Kittredge worked two scoreless innings, and after Jeffrey Springs got the first two outs of the seventh, J.P. Feyereisen (2-2) finished the frame and worked a scoreless eighth.  Pete Fairbanks put up a zero in the ninth to finish out the game.

The Rays will have Monday off before starting a two-game series with the Washington Nationals Tuesday at Tropicana Field.