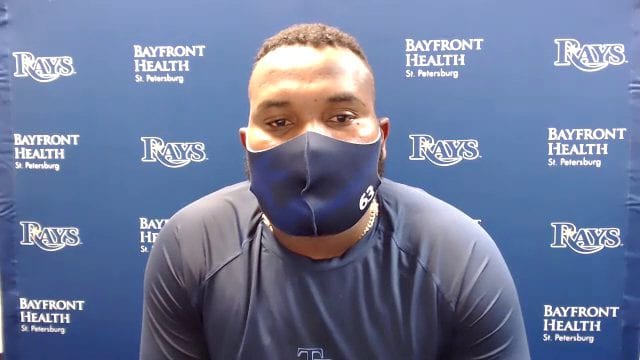 Tampa Bay jumped out to a 4-0 lead before Michael Wacha even had to throw a pitch, with RBI doubles by Joey Wendle and Francisco Mejia sandwiching a two-run homer by Brandon Lowe, his third of the year and second in as many days.

But much like Tuesday’s middle game of the series, every time the Rays scored, Kansas City would counter.  Wednesday it was the long ball that helped the Royals, with Hunter Dozier blasting a two-run shot off Wacha in the second, and Jorge Soler’s solo homer in the fourth cutting the lead back to 4-3.

Tampa Bay grew out their lead with a sacrifice fly by Wendle in the fifth, and a run-scoring double by Meadows in the seventh.

Wacha exited the game with two out in the sixth holding on to 5-3 lead, but the bullpen, tired after a stretch of 13 straight games, faltered in the bottom of the seventh.  Jeffrey Springs gave up a two-run triple to Hanser Alberto, and Ryan Thompson allowed Kansas City to take the lead allowing a two-run homer to Santana.

The Rays again rallied to tie the game in the eighth on a pinch-hit RBI double by Randy Arozarena, and took an 8-7 lead in the top of the ninth on a RBI doube by Wendle.

But the Rays third baseman would be stranded at second base, and Kansas City would go to work against closer Diego Castillo.  Michael A. Taylor started with a flare single to right.  Pinch-runner Jarrod Dyson stole second base, moved to third on a sacrifice bunt by Alberto, and scored on a squeeze from Nicky Lopez, tying the game.  Whit Merrifield’s groundout moved Lopez into scoring position, and Santana was intentionally walked.  A wild pitch moved both runners up a base, and Salvador Perez’s single gave the Royals the win.

Tampa Bay will have Thursday off before starting a ten-game homestand Friday with the first of three games against the Toronto Blue Jays.