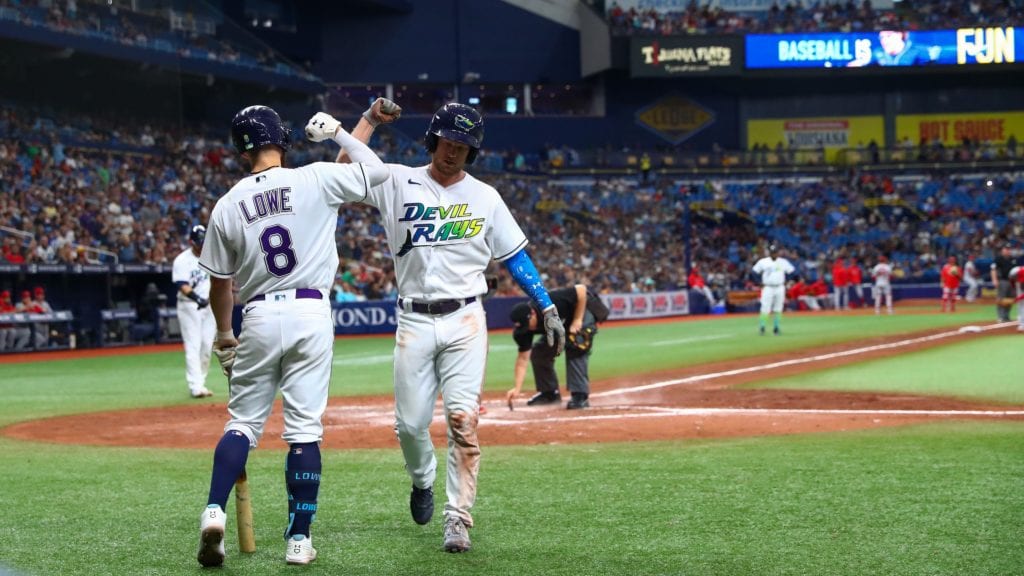 The Tampa Bay Rays pounded out 15 hits against Los Angeles Angels pitchers, including the first career four-hit game for Ji-Man Choi and home runs from Manuel Margot and Mike Zunino in a 13-3 victory.

Margot got Tampa Bay on the board in the bottom of the second inning, taking an 0-1 pitch from Angels starter Alex Cobb and back-spinning it into the seats in left for his eighth home run of the season.

Rays starter Shane McClanahan, who cruised through the first two innings Saturday, had a hiccup in the top of the third, as he gave up a double to Juan Lagares to start the inning, then a single to David Fletcher to put runners on the corners, and Shohei Ohtani doubled in Lagares to make it 2-1. After striking out Luis Rengifo, McClanahan then gave up a two-run double to Anthony Rendon to fall behind 3-2.

The left-hander would settle down, throwing three more scoreless innings before departing.

But the Rays rallied back in the fourth, as Randy Arozarena started the inning with a base hit and Choi followed with a single of his own two batters later.  Margot popped out for the second out of the inning, but Joey Wendle picked up his teammate and tied the game with a base hit, bringing in Arozarena.

Brett Phillips followed with a triple to center, bringing in both runners to give Tampa Bay the lead for good, and scored on a wild pitch for added insurance.

The Rays added a run in the fifth on a Choi RBI single, and Zunino made it 8-3 in the sixth with a towering home run to left.

Tampa Bay added five more runs in the seventh, sending 11 men to the plate against Jose Quijada and Junior Guerra.  Choi made it 9-3 with a RBI double off the top of the right field wall, Phillips added a two-run single, while Wander Franco drew a bases-loaded walk, and Arozarena set the score with an RBI single.

Drew Rasmussen pitched a scoreless inning of relief, and Louis Head, called up Saturday when Josh Fleming was placed on the injured list, put up zeroes in the eighth and ninth to finish out the game.

We use cookies to ensure that we give you the best experience on our website. If you continue to use this site we will assume that you are happy with it.Ok