Rays Even Weekend Series With Shutout Of Rangers 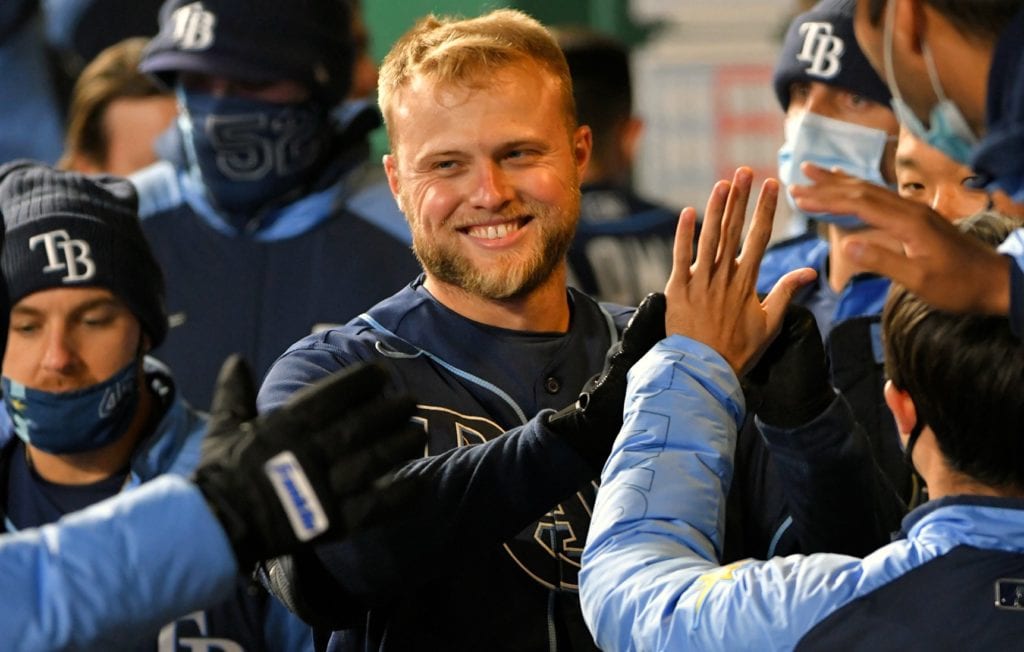 Austin Meadows celebrates in the dugout after his ninth inning home run in Kansas City (photo: Will Vragovic/Tampa Bay Rays)

Rich Hill and four relievers combined to throw a four-hit shutout, and Austin Meadows‘ two-run single would be the difference as the Tampa Bay Rays defeated the Texas Rangers 3-0 Saturday at Globe Life Field.

Tampa Bay needed just three batters to jump out in front for good, as Kolby Allard walked Manuel Margot to start the bottom of the first, then gave up a base hit to Yandy Diaz.  That put runners on second and third for Meadows, who singled to center and allowed both runners to come in.

The game would stay 2-0 until the eighth, when Marcus would connect off reliever Joely Rodriguez for his fifth home run of the year.

Hill (5-2) worked the first five innings, allowing two hits and a walk while striking out three on just 59 pitches.  Ryan Thompson worked the sixth and for the first out of the seventh before Jeffrey Springs finished out the frame.  Pete Fairbanks allows a hit but struck out a pair in the eighth, and Diego Castillo struck out the side in the ninth to earn his ninth save.

The win keeps Tampa Bay one game up on the Boston red Sox for the lead in the American League East.

The Rays can finish off a series win and a winning road trip with a victory in Sunday’s finale.  Michael Wacha (1-1, 4.63 ERA) will open what is expected to be a bullpen day — after manager Kevin Cash announced before the game that Tyler Glasnow‘s start would be pushed back to Tuesday — against Dane Dunning (2-4, 4.67 ERA).  First pitch is scheduled for 2:35.