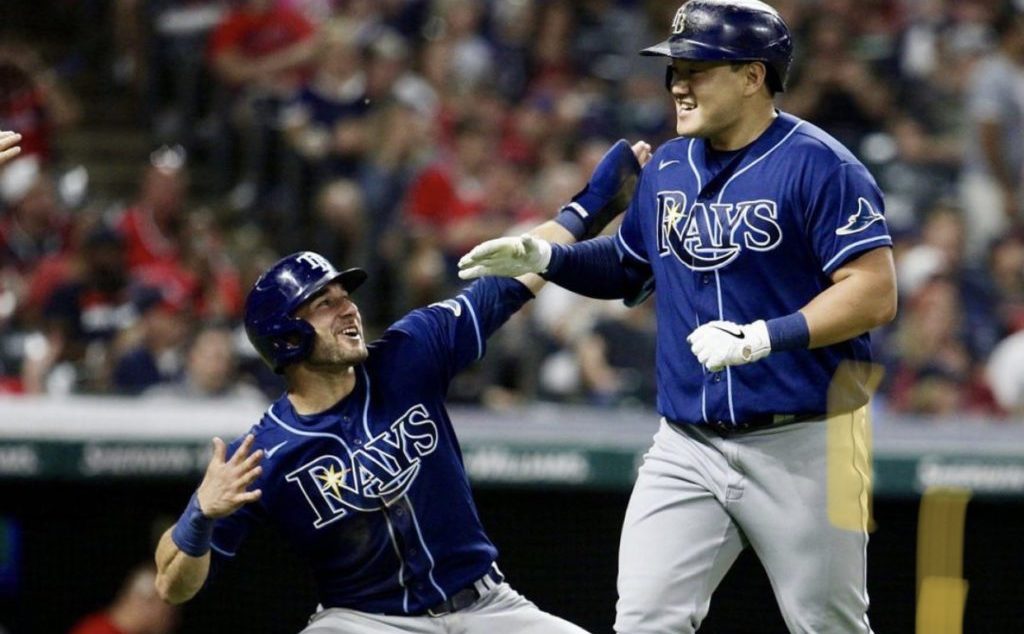 The Tampa Bay Rays could not hold on to a 4-0 lead Friday night at Progressive Field, but pulled away with a six-run top of the ninth inning, going on to defeat the Cleveland Indians 10-5.

Tampa Bay jumped on Zac Plesac in the top of the second inning thanks to a series of defensive miscues that followed a one-out walk to Yandy Diaz and a base hit, the first of three singles on the night, for Wander Franco.  Randy Arozarena singled to center, scoring Diaz, and when Oscar Mercado‘s throw to third base was mishandled by Jose Ramirez for an error, allowing Franco to score.  Ramirez’s throw to the plate was wide and went to the backstop for a second error, and Arozarena circled the bases to make it 3-0.

Nelson Cruz, making his Rays debut Friday after being acquired from the Minnesota Twins on Thursday, grounded out in his first at-bat, but made up for it in his second, blasting his first home run with Tampa Bay and his 20th of the year to make the lead 4-0 leading off the third.

After a relatively easy first time through the Cleveland order, Rays starter Josh Fleming ran into trouble in the third, giving up a walk to Cesar Hernandez followed by a single to Amed Rosario, and Ramirez cut the Tampa Bay lead back to just a single run with a three-run homer.

Fleming’s night would come to an end after just four innings, and Andrew Kittredge followed with two scoreless innings of relief, but Cleveland drew even against Matt Wisler as Hernandez reached on a single that deflected off the right-hander, and Ramirez tripled him in two batters later to make it 4-4.

But much like Thursday, Tampa Bay used the ninth inning to their advantage, as Arozarena led off with a base hit, and Kevin Kiermaier was hit on the foot by a pitch from Nick Wittgren.  Joey Wendle then pinch-hit for Mike Zunino, and singled in Arozarena to break the tie for good.

Ji-Man Choi then got a 2-0 pitch from Wittgren in the heart of the plate, and crushed it into the seats in right for his fifth home run of the season, a three-run shot that made it 8-4.

Cruz followed with a walk, and Brett Phillips followed with a single, moving the DH to third.  Diaz brought in Cruz with a groundout, and Franco’s third single of the night plated Phillips to make it 10-4.

Pete Fairbanks allowed a solo homer to Daniel Johnson in the bottom of the ninth to set the score.

The win allowed Tampa Bay to maintain pace with the Boston Red Sox, who stay one game ahead in the American League East.

The Rays will go with a bullpen day on Saturday, with Drew Rasmussen opening against J.C. Mejia.  First pitch is scheduled for 7:10.