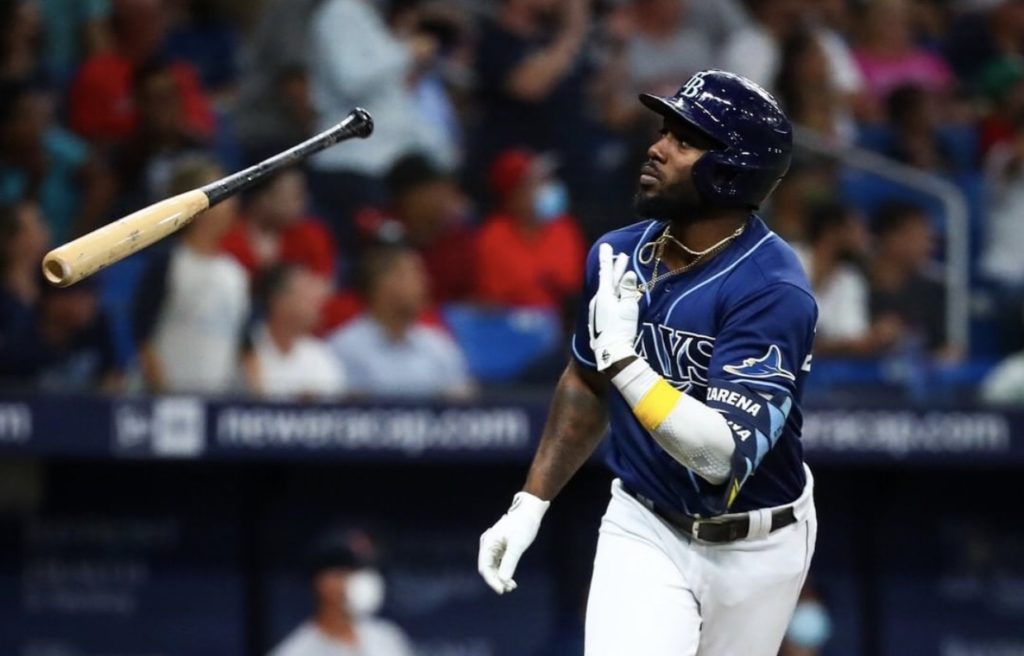 The Boston Red Sox have been dealing with COVID issues in their players and coaching staff off the field, and the hottest team opposing them on the field, and the Tampa Bay Rays made them pay again Tuesday night, as Randy Arozarena homered, Yandy Diaz drove in a pair and Wande Franco extended his on-base streak to 31 games in Tampa Bay’s 8-3 win.

Boston actually had an early 1-0 lead against Ryan Yarbrough, who allowed a two-out double by J.D. Martinez and a base hit by Xander Bogaerts to drive him in.

But Bogaerts would leave Tuesday’s game after learning he was the latest Red Sox player to test positive for COVID-19, and things went south for Boston soon thereafter.  Brad Peacock, who the Red Sox had traded for Monday afternoon, gave the lead back in the bottom of the second by giving up a solo homer to Arozarena, his 18th of the season.

The Rays added six more runs in the third, chasing Peacock from the game and also beating up on his relief, left-hander Stephen Gonsalves.  Kiermaier drew a leadoff walk and Peacock hit Francisco Mejia.  He’d walk Nelson Cruz two batters later to load the bases with one out, and Franco’s RBI single, coupled with a Bobby Dalbec error made it 3-1.  Gonsalves came in and immediately allowed Cruz to score on a wild pitch, then Austin Meadows plated Franco with an RBI single.  Arozarena was hit by a pitch, and after Joey Wendle’s flyout, Yandy Diaz followed with a double into no-man’s land between Yairo Munoz and Hunter Renfroe made it 7-1.

The game stayed 7-1 until the sixth, when Kyle Schwarber’s 28th home run of the season, a solo shot off Yarbrough, made it 7-2.

The Rays got that run right back in the bottom of the innings against reliever Phillips Valdez, as Diaz, who was hit by a pitch, moved to third on another error by Dalbec on a Kiermaier grounder, and scored on a sacrifice fly by Mejia.

Boston got back into the game against Dietrich Enns, who gave upo an RBI single to Rafael Devers in the eighth, and run-scoring singles in the ninth to Schwarber and Martinez, forcing Kevin Cash to bring in Andrew Kittredge, who struck out pinch-hitter Travis Shaw and Devers to end the game and earn his fifth save.

Tampa Bay ends the month of August with a 21-6 record, and at 84-48 are tied with the San Francisco Giants for the best record in baseball.  They currently hold an eight-game lead over New York in the American League East.