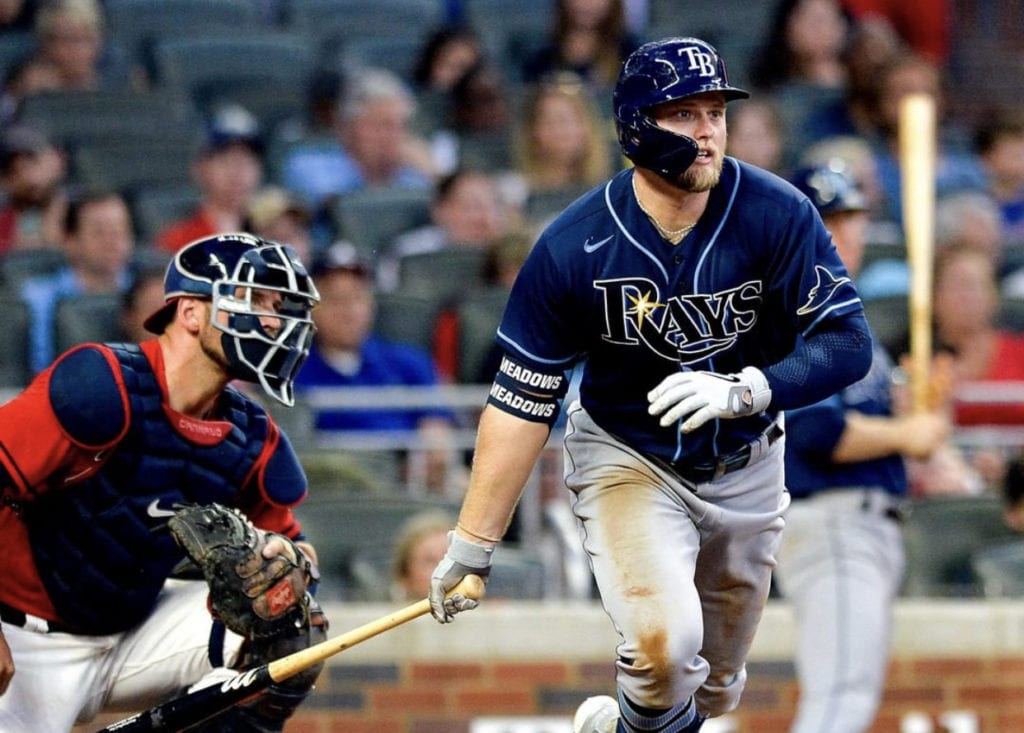 The Tampa Bay Rays saw their extra-inning losing streak end at six straight games, as Austin Meadows‘ RBI single, his third run batted in of the night, in the top of the tenth inning broke a 6-6 tie and gave the Rays a 7-6 win over the Atlanta Braves Friday night at Truist Park.

Tampa Bay looked to be on the verge of wasting an opportunity with a pair on and nobody out after Jesse Chavez struck out Ji-Man Choi and got Wander Franco to fly to left.  But Meadows came through with a base hit to right to bring in Brett Phillips, who started the inning at second base, in to break the tie.

The Rays initially took th lead in the top of the second inning against Braves starter Charlie Morton, who hit Meadows with a pitch leading off the inning.  Joey Wendle doubled Meadows to third base, and Kevin Kiermaier‘s RBI single away from the shift and in to left field gave Tampa Bay a 1-0 lead.

Mike Zunino, doubled the lead with a groundout, bringing in Wendle.

But Michael Wacha could not hold on to the lead, as he walked Ozzie Albies to lead off the fourth, and Austin Riley followed by getting a hanging breaking ball and blasting it to straightaway center for his 15th home run of the year, tying the game.  Dansby Swanson followed up two batters later with a solo shot, his 16th of the year, breaking the tie.

Ji-Man Choi would get the gane back eben on the first pitch of the fifth, driving a Morton fastball to the opposite field and over the fence in left for his fourth homer of the season.

Freddie Freeman gave the Braves the lead back in the bottom of the inning, as his two-run blast off J.P. Feyereisen, his 20th of the season, made it 5-3.

A sacrifice fly by Meadows cut the deficit back to a single run in the sixth, but Orlando Arcia pushed the game back to two runs in the bottom of the inning with a RBI single.

The Rays drew even in the eighth, as Brandon Lowe singled off Chris Martin with one out, moving to second on a base hit by Franco two batters later.  Meadows drove in Lowe with a base hit to right to make it 6-5, and Joey Wendle’s infield single plated Franco to tie the game.

Matt Wisler, who allowed just one hit and struck out three while working a scoreless eighth and ninth inning, earned the win, while Pete Fairbanks worked a 1-2-3 bottom of the tenth, which included getting Joc Pederson, acquired Thursday from the Chicago Cubs, to ground out to end the game and record his fourth save.

The win keeps Tampa Bay 1 1/2 games behind the Boston Red Sox for the lead in the American League East.