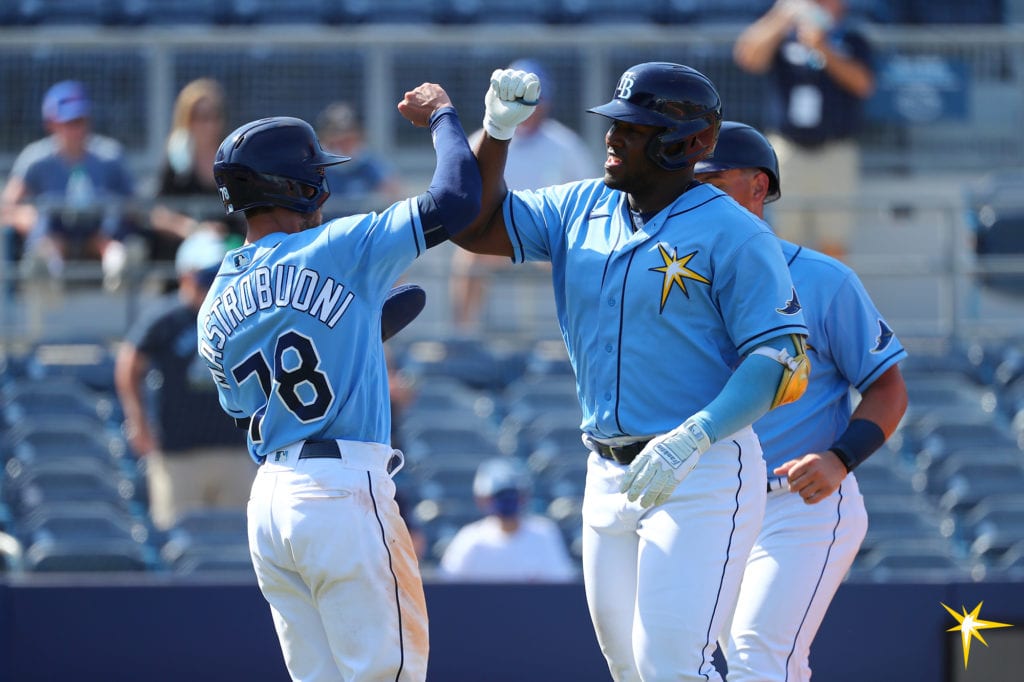 The Tampa Bay Rays used a twelve-run eighth inning to overtake the Atlanta Braves in the home finale of the 2021 Grapefruit League, taking Sunday’s contest 16-5.

Trailing 5-4, Tampa Bay started out the home eighth by drawing back-to-back walks, as Garrett Whitley and Miles Mastrobuoni each drew free passes off reliever Chad Sobotka.  After a double steal, Chris Betts drove in both runners with a base hit, giving the Rays the lead for good but just starting the damage in the inning.  Moises Gomez followed up with a double and after Atlanta went back to the bullpen to bring in Victor Arano, Joseph Odom plated both Betts and Gomez with a base hit.

Tristan Gray doubled Odom to third, and Wander Franco drove in the catcher with a single to make it 10-5.  Xavier Edwards‘ base hit scored Gray,  Arano walked Whitley to load the bases, and Daysbel Hernandez walked Mastrobuoni to force in another run.  A wild pitch made it 13-5, and Gomez capped off the scoring with a three-run blast.

Rays starter Ryan Yarbrough and Braves pitcher Charlie Morton kept the game scoreless through the first three innings of the game, but Atlanta would get to Yarbrough first, as Marcell Ozuna‘s RBI single in the top of the fourth gave Atlanta a 1-0 lead.

Tampa Bay countered in the bottom of the fourth against reliever Huascar Ynoa, with an infield single by Manuel Margot and a double by Joey Wendle leading to a sacrifice fly by Yandy Diaz to tie the game.  A wild pitch by Ynoa allowed Wendle to score to break the tie, and Kevin Kiermaier capped the inning with a solo home run to right.

Left-hander Jeffery Springs allowed a pair of two-run homers: one to Freddie Freeman in the sixth that tied the game, and another to Alex Jackson an inning later that gave Atlanta a 5-3 lead, but Tampa Bay got back within a run in the bottom of the seventh with a solo shot by Joseph Odom that cleared the scoreboard in left-center.

Tampa Bay wraps up the 2021 Grapefruit League with two more games on the road before the beginning of the regular season.  Monday will see the Rays head to Sarasota for a matchup with the Baltimore Orioles.  Rich Hill (0-0, 8.10 ERA) will get the start, taking on Bruce Zimmermann (0-0, 0.00 ERA).  First pitch is scheduled for 1:05.