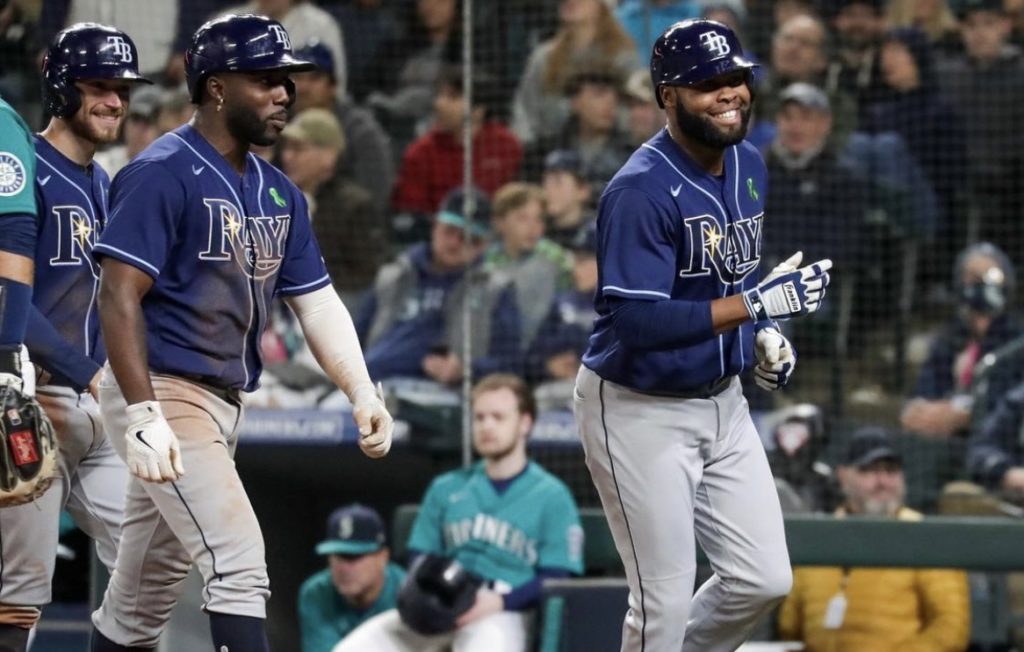 Manuel Margot’s three-run homer in the top of the ninth inning proved to be the final blow in what turned out to be a wild back and forth affair, with the Tampa Bay Rays holding on for an 8-7 win over the Seattle Mariners Friday for their fifth consecutive win on their west coast road trip.

Margot’s big blast came after a pair of one-out singles by Randy Arozarena and Brandon Lowe, the first two base runners allowed this season by Paul Sewald.  He got a 1-1 fastball in the center of the strike zone, and crushed it to straightaway center for his first home run of 2022.

Margot’s homer gave the Rays their third comeback of the night.  They first rallied from down 2-0 after Eugenio Suarez’s home run in the bottom of the first to score three times against Logan Gilbert in the top of the second, capitalizing on a one-out walk by Taylor Walls and a base hit by Francisco Mejia with consecutive run-scoring singles by Yandy Diaz, Wander Franco, and Arozarena.

Seattle regained the lead in the fourth against Josh Fleming thanks to a sacrifice fly by Abraham Toro and a base hit from Dylan Moore.  But Tampa Bay evened the game in the top of the fifth, as an infield single by Harold Ramirez, coupled with a bad throw by Suarez, allowed Arozarena to score from second base.

Scoring from 2nd on an infield hit to tie the game? Yup, that sounds like Randy#FridayNightBaseball | #RaysUp pic.twitter.com/eiL6t59Jvu

Ramirez would also drive in Franco in the seventh, as his fielder’s choice grounder with the bases loaded made it 5-4.

The Mariners appeared to have wrestled control away in the bottom of the eighth against Ryan Thompson, who allowed Julio Rodriguez to reach on an infield single before giving up a two-run pinch-hit homer to Jarred Kelenic.

Thompson also allowed a solo homer to Suarez in the bottom of the ninth to cut the lead to 8-7, but Brooks Raley ended up getting the final three outs of the game to earn his third save.

The Rays can guarantee a winning road trip, and extend their season-long winning streak to six straight games with a win Saturday evening, as Drew Rasmussen (2-1, 3.13 ERA) takes on Marco Gonzales (1-3, 4.05 ERA).  First pitch is scheduled for 9:10.