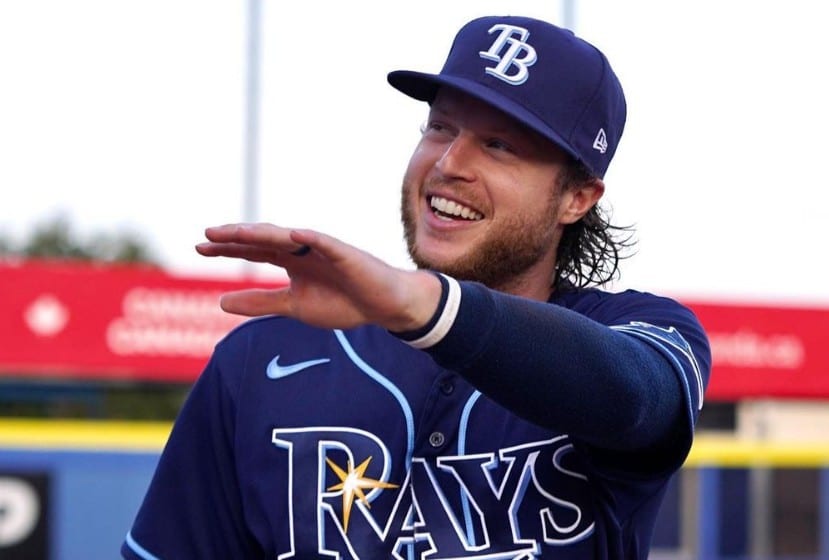 The Tampa Bay Rays are finding all sorts of different ways to win on their current streak.  Sunday they rallied from down two runs in the ninth by scoring four times, including three bases loaded walks, to defeat the Toronto Blue Jays 6-4, earning their tenth consecutive victory.

Trailing 4-2 with three outs remaining, the Rays saw Blue Jays closer Tyler Chatwood struggle with his command. Chatwood walked  and pinch-hitter Brandon Lowe followed up with a base hit.  Taylor Walls grounded into a fielder’s choice, erasing Lowe.  Brett Phillips singled in Choi to cut the deficit back to one run.  Randy Arozarena flied out for the second out of the inning, but Chatwood walked Yandy Diaz to load the bases and Charlie Montoyo was out to get the baseball and bring in lefty Travis Bergen.  Bergen then walked Austin Meadows to tie the game, Manuel Margot to break the tie, and Mike Brosseau to provide Tampa Bay with some insurance.

The Rays took an early lead, as Arozarena led off the game by doubling off Blue Jays starter Hyun Jin Ryu and Margot drove him in htree batters later with a base hit.

Michael Wacha, who was activated from the injured list to start the game, worked two scoreless innings, but Toronto tied the game in the fourth thanks to a solo home run by Teoscar Hernandez off Josh Fleming.

Francisco Mejia gave the Rays the lead back in the top of the fifth with a solo homer off Ryu, his third of the year and second of the series, but Hernandez tied the game back up in the bottom of the inning with a base hit on Fleming that scored Bo Bichette.

The Blue Jays took the lead in the eighth, when Fleming gave up a base hit to Hernandez and a two-run homer to Randal Grichuk.

The ten-game winning streak is the longest for the franchose under Kevin Cash, and second longest in franchise history behind the 12 game streak in June, 2004.